Nine Southern Fiction Reads To Take To The Beach 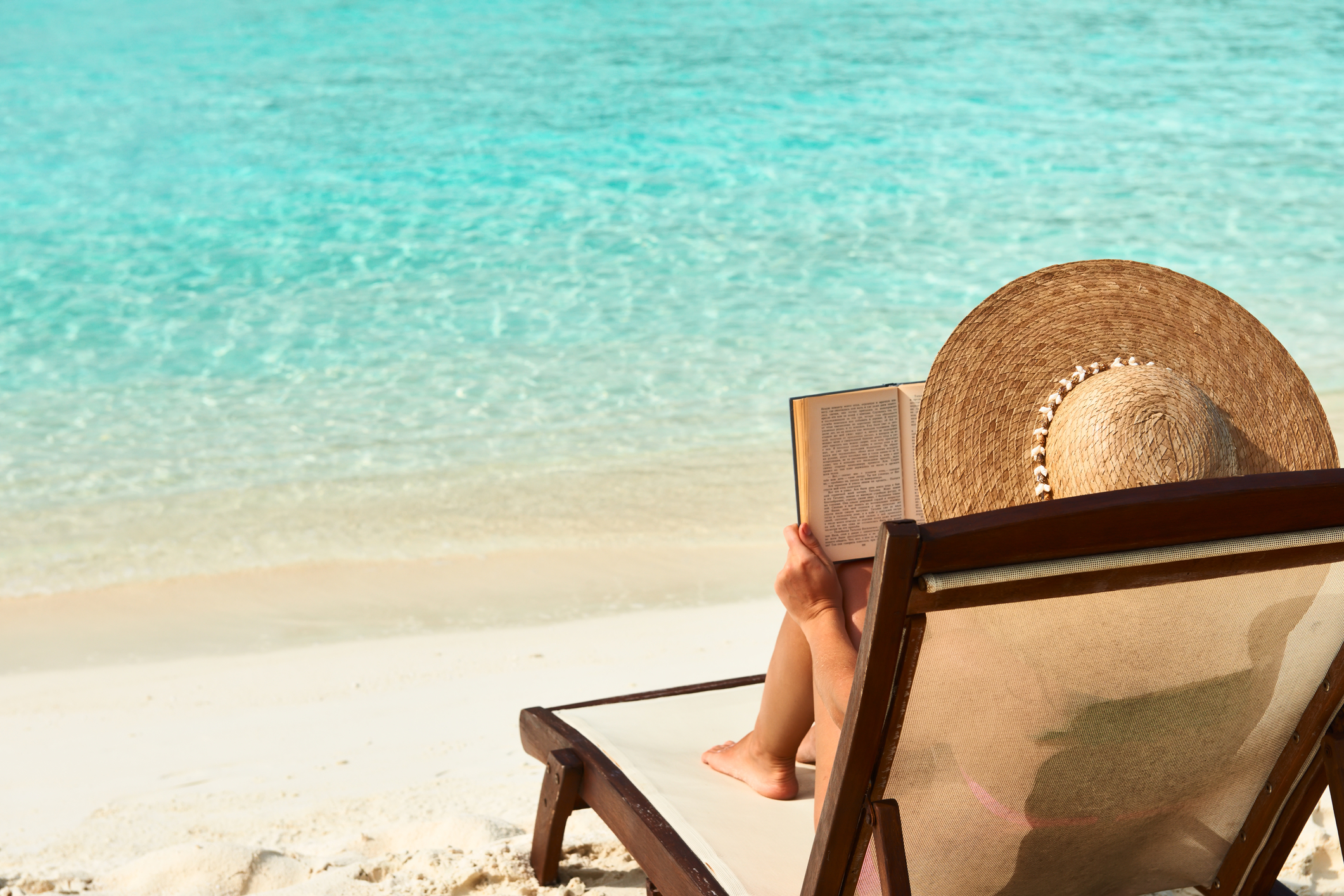 When it comes to the quintessential beach read, we love southern stories set at the beach or a bay, a cove an island. You get the picture, right? Sunny suns, cool breezes gentle waves… . And we’ve found nine new releases that provide all the southern summer vibes you need in fictional and real towns up and down the Eastern Seaboard.

We’ve got two sweet romances, three heartfelt women’s fiction four cozy mysteries to entertain you this summer. Which one will you take to the beach? Or enjoy by the pool? Or on your porch…

Rising-star reporter Dakota Jones is usually the one breaking the news—until an inadvertent scandal wrecks her career. The only place she can go to regroup is Holly Grove Island. But her small North Carolina hometown comes with a major catch: Dexter Roberts, the first man to break Dakota’s heart, is her new boss. Working alongside Dexter, who is more attractive than he has a right to be, shows Dakota what might have been . . . but she isn’t giving him another chance to break her heart.

Dexter has always regretted the way things ended between him and Dakota. Her return could be his opportunity to finally make amends. But the more time he spends with Dakota, the more he realizes his feelings for her never went away. Now he has just a few months to convince her to give their love a second chance. But for Dakota to agree to stay, Dexter will have to reveal the devastating truth about why he let Dakota go all those years ago.

The Beach House by Jenny Hale

When her gram passes away, Melanie Simpson feels utterly lost. But her grandmother’s will gives her a purpose: an inheritance to buy a crumbling house in Rosemary Bay, Florida. They used to visit the village every summer, sit by the sparkling water on a beach the color of , and daydream about turning the place on the corner into a bed and breakfast.

On her first night in her new hometown, Melanie meets local contractor and landowner Josh Claiborne, whose eyes match the dazzling sea. Melanie plans to restore the beach house to its original glory, and Josh is the perfect person to help renovate the wrap-around porch weathered by the coastal breeze and the peeling white paint faded by the sun.

But hiding in a closet is a yellowing stack of letters that could change everything. The looping handwriting reveals the mystery of the rickety house—a buried history that touches everyone in Rosemary Bay. Will its secrets bring Melanie and Josh together or tear them apart?

The Lights of Sugarberry Cove by Heather Webber

Sadie Way Scott has been avoiding her family and hometown of Sugarberry Cove, Alabama, since she nearly drowned in the lake just outside her mother’s B&B. Eight years later, Sadie is the host of a much-loved show about southern cooking and family, but despite her success, she wonders why she was saved. What is she supposed to do?

Sadie’s sister, Leala Clare, is still haunted by the guilt she feels over the night her sister almost died. Now, at a crossroads in her marriage, Leala has everything she ever thought she wanted—so why is she so unhappy?

When their mother suffers a minor heart attack just before Sugarberry Cove’s famous water lantern festival, the two sisters come home to run the inn while she recovers. It’s the last place either of them wants to be, but with a little help from the inn’s quirky guests, the sisters may come to terms with their strained relationships, accept the past, and rediscover a little lake magic.

The Shell Collector by Nancy Naigle

Two years after her husband’s death, Amanda Whittier has two children to raise alone, an abandoned dream of starting a business, and a fixer-upper cottage by the sea. She has no room in her life for anything else and little interest in moving on after losing the man she loved.

Paul Grant is a relative newcomer to the area, and his work with former military dogs needing rehabilitation has been good for the town. Though he loved once before, he’s convinced he’s not suited for romance and is determined to find meaning—alone—through his work and role in the community.

Widowed Maeve Lindsay was born and raised on Whelk’s Island. Spirited, kind, and a little mischievous, she pours her life into the town. But she carries a secret that shapes her every move.

Together, these three souls find encouragement in the most mysterious places and discover a love that’s bigger than their pain, healing their wounded hearts in ways none of them could have hoped for or expected.

Bookshop By The Sea by Denise Hunter

After her mother became bedridden and her father bailed on the family, Sophie found herself serving as a second mother to her twin brother, Seth, and younger sister, Jenna. Sophie supported her siblings through their college years, putting aside her own dream of opening a bookshop in Piper’s Cove—the quaint North Carolina beach town they frequented as children.

Now it’s finally time for Sophie to follow her own pursuits. Seth has a new job, and Jenna is set to marry her college beau in Piper’s Cove. But the destination wedding reunites Sophie with best man Aiden Maddox, her high school sweetheart who left her without a backward glance.

When an advancing hurricane strands Aiden in Piper’s Cove after the wedding, he finds the hotels booked to capacity and has to ask Sophie to put him up until the storm passes. As the two ride out the weather, old feelings rise to the surface. The delay also leaves Sophie with mere days to get her bookshop up and running. Can she trust Aiden to stick around? And will he find the courage to risk his heart?

It’s almost Halloween, and the small island of Charm, North Carolina is decked out for the festivities. When Everly Swan agrees to close her iced tea shop early to help her aunts host their annual haunted historic walking tour, she expects some good-natured spooks. But the night turns grave when one of the ghostly actors is found dead. To complicate matters, the victim scratched Everly’s name into the ground before she died, making her a key suspect.

The murder mystery heats up when Everly’s potential boo, Detective Grady, takes the case—and he definitely doesn’t want her getting involved. Will their seaside romance be threatened by all the ghostly drama? But when a phantom sailor straight out of local legend starts leaving Everly threatening messages, she has to get involved… With a local election , ghosts on the loose, and a search for long-lost buried treasure, Everly can’t help but stir the pot!

A Hex For Danger by Esme Addison

The small town of Bellamy Bay has its share of skeletons in its closet, but it isn’t used to bodies turning up in the local history museum. After all, this coastal North Carolina town is much like any other…except, of course, for the mermaids.

Helping to run the family business, an herbal apothecary while keeping her supernatural secret hidden is no easy feat for water witch Aleksandra Daniels.  But somehow she’s still found time to help her friend Celeste, who has her own Caribbean mermaid heritage plan the annual Mermaid Festival. As fun-seekers throng the beaches, Alex gets to know and is intrigued by renowned artist Neve Ryland, who’s in town to decorate the local park with a mermaid-themed mural. Celeste, however, is less enamored with the artist, as Neve has been spending entirely too much one-on-one time with her boyfriend Jasper, director of Bellamy Bay’s history museum. Then, a reception for Neve ends abruptly when the artist is found dead in his office.

The police investigation nets Celeste who asks Alex to find the true culprit. With the help of her magically-inclined aunt and cousins, Alex dives in to clear her friend’s name. But there was more to Neve Ryland than met the eye…and Alex fears she may be in way too deep. Will she catch the crook or be next on the hook?

Reserved For Murder by Victoria Gilbert

Beaufort, North Carolina, is home to Chapters Bed and Breakfast, owned and operated by former schoolteacher Charlotte Reed. This historic 18th-century inn draws in voracious readers from far and wide with its lovingly curated special events celebrating a host of genres and authors.
On this sunny July weekend, a visit by one of the biggest names in romantic fantasy attracts throngs of admirers to the quaint coastal village. That’s not ideal, as the author retreated to Chapters to get away from it all for a while. No matter–she’ll appease her fans with a “Tea and Talk” meet-and-greet at the B&B celebrating her bestselling series (starring a devilishly dashing, time-traveling pirate), follow that up with a quick book signing at Bookwaves, the hip indie bookstore across town, and spend the remainder of the weekend in delightful repose.
But when the president of the reclusive writer’s fan club is found dead in the harbor by the Beaufort docks–done in by a blunt-force blow to the head–it’s up to Charlotte Reed, her neighbor Ellen, and Ellen’s trusty Yorkshire terrier to sniff out the killer. Because if they can’t, a spectacularly successful book series–and its author–may come to a sudden, lethal conclusion.

Deadly Ever After by Eva Gates

They’re getting married! Lucy Richardson and Connor McNeil have announced their engagement. Their friends throw a party for the couple at Coquina Beach, close to Lucy’s beloved Bodie Island Lighthouse Library.

As they’re packing up the presents and the (few) leftovers from Josie’s Cozy Bakery, who should arrive but Richard Eric Lewiston III, Lucy’s former almost-fiancé, and his overbearing mother Evangeline. Push comes to love when Evangeline makes no secret of why she’s there: to get Lucy and Ricky back together.

Lucy isn’t tempted in the least, and Ricky is nothing but embarrassed at his mother’s desperate ploy. Before returning to Boston, Evangeline throws a dinner party at Jake’s Seafood Bar for a reluctant Lucy and her family. Lucy hopes to get the dinner over with and see Evangeline and Ricky returning to Boston, but when a body is found at the restaurant’s kitchen door, Lucy is again forced to unwillingly put on her detective’s hat and do what she can to save her family and her engagement.

Meanwhile, the reading club is reading The Hound of the Baskervilles, and open war breaks out in the Lighthouse Library when Lucy agrees to temporarily take care of a dog named Fluffy. 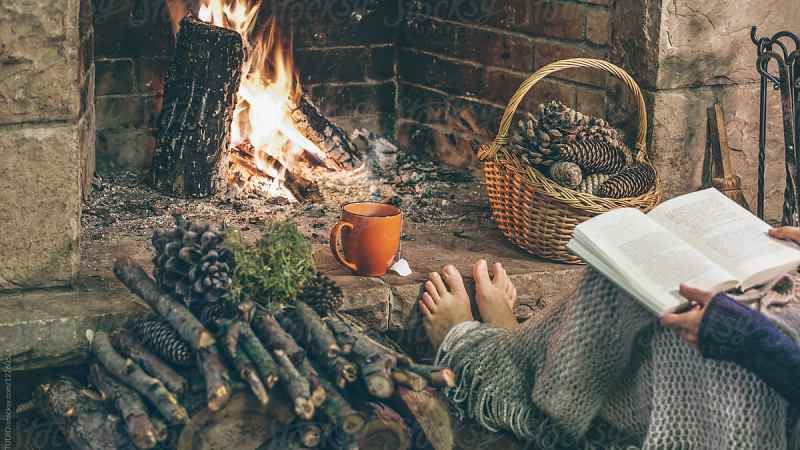 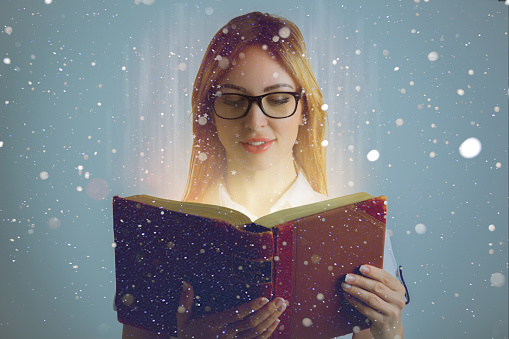 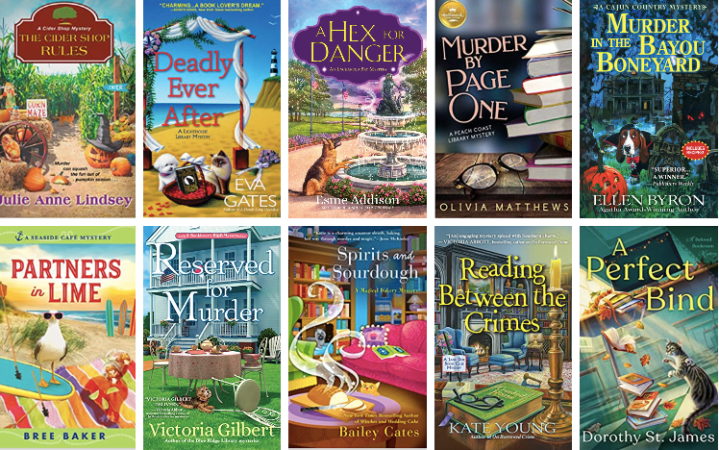 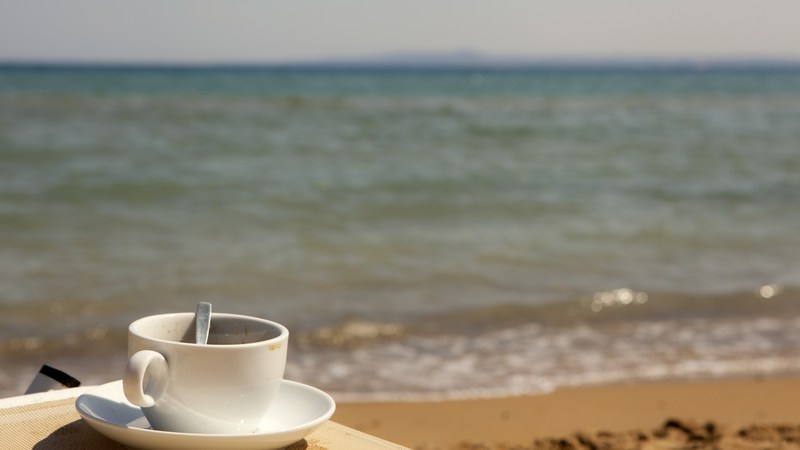 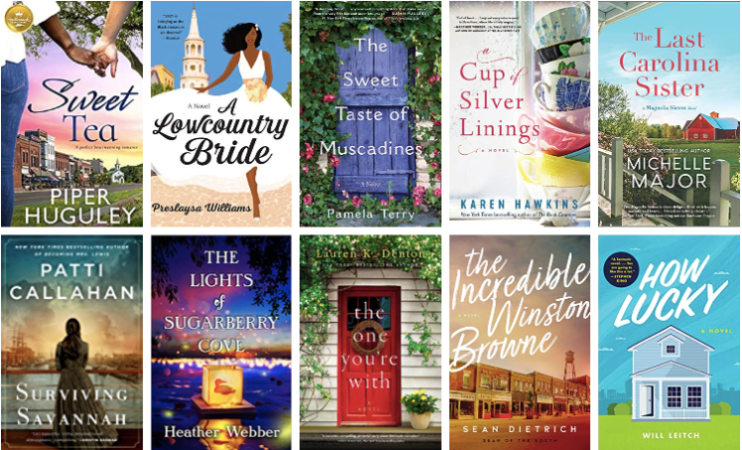 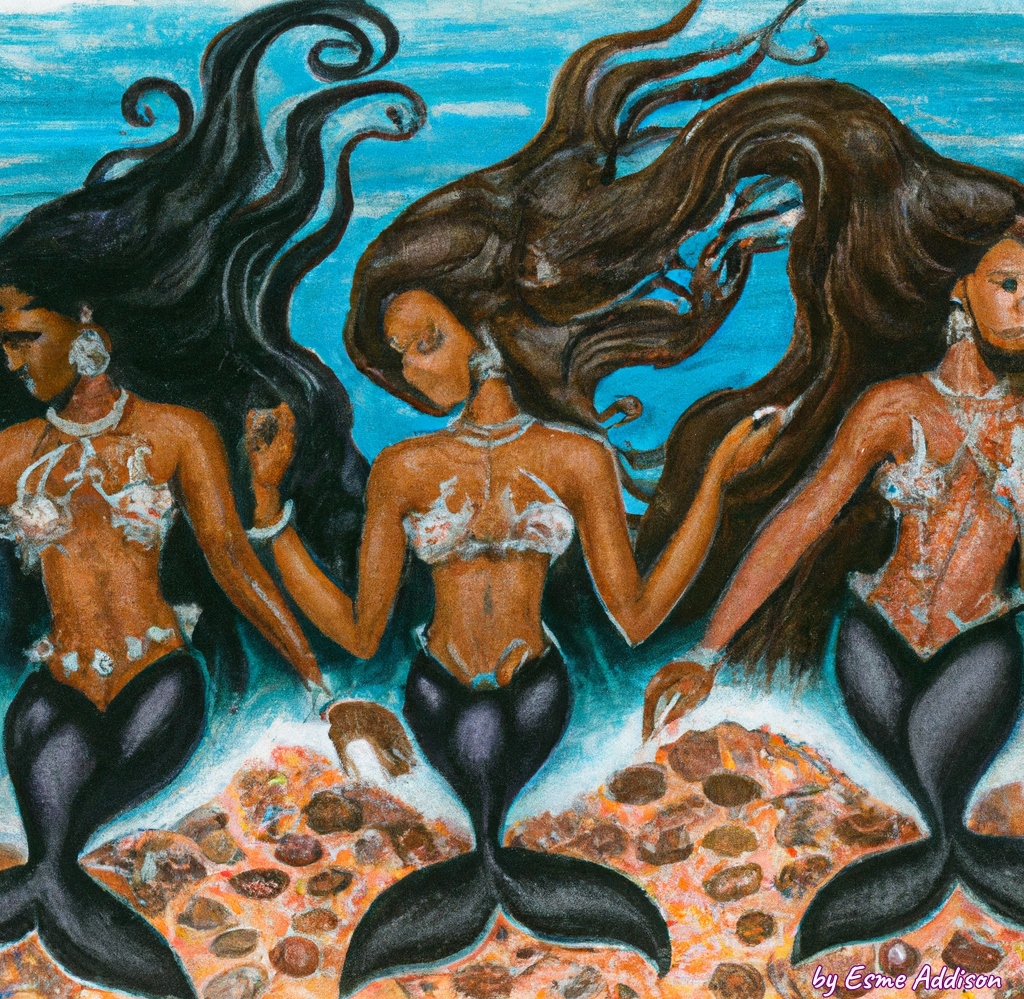 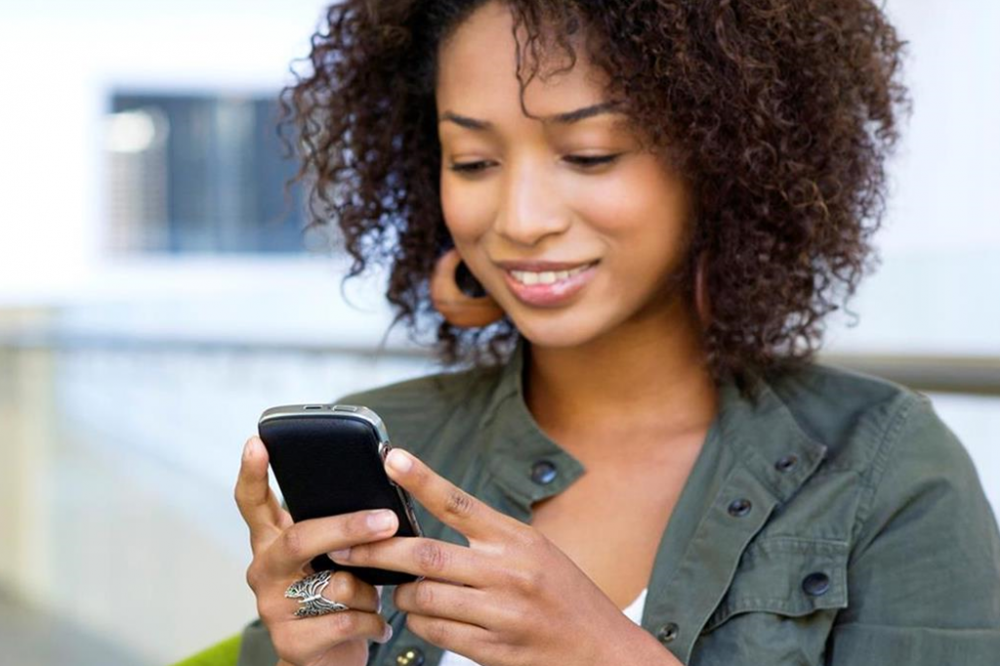